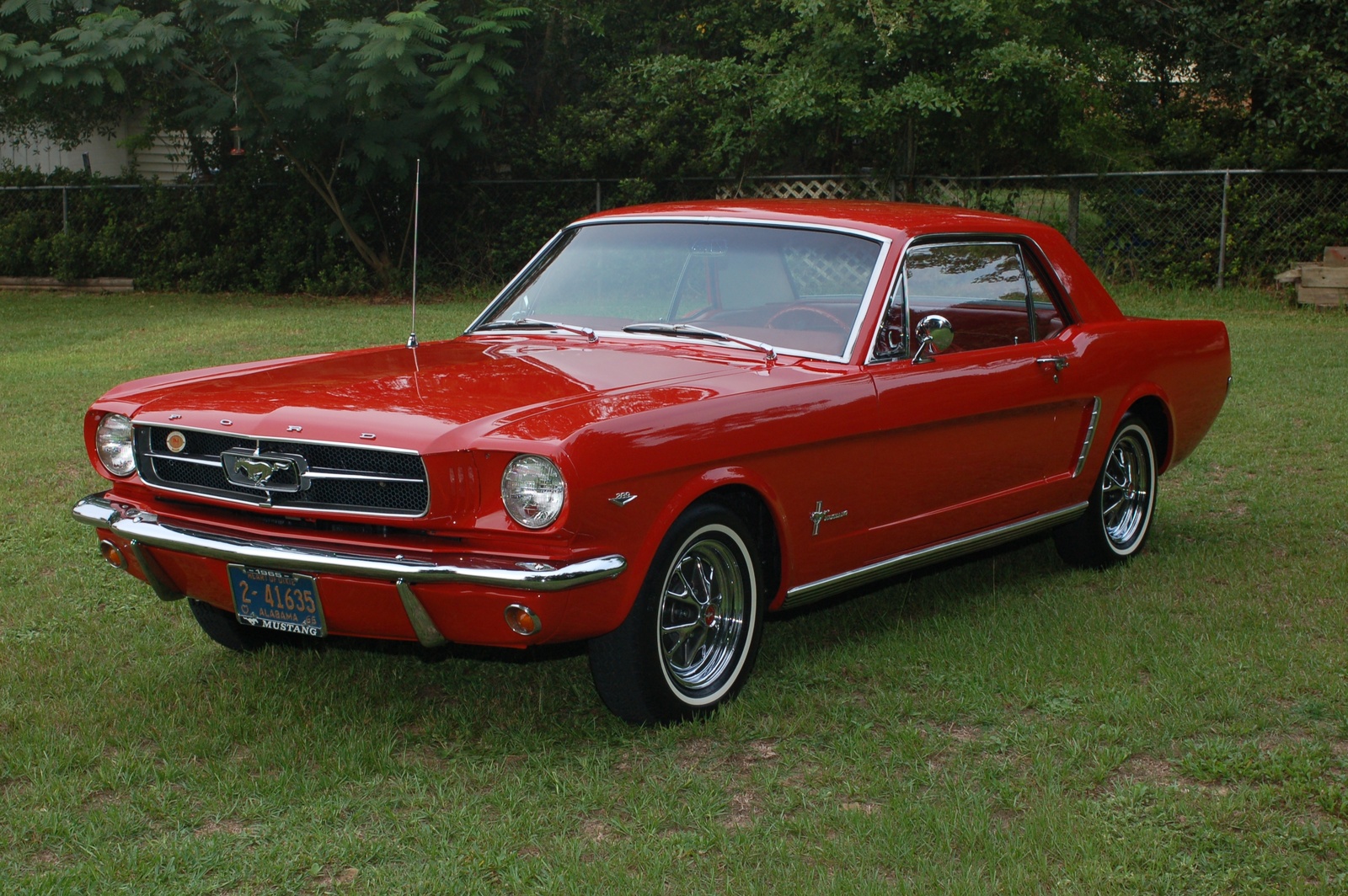 EVEN BETTER THAN THE EDSEL - The Ford Mustang, introduced in 1964, took America by storm

The 1960s marks the decade when Rock and Roll came into its own as a force to be reckoned with. Radical changes were taking place throughout the world, and the great artists and bands of the decade provided the soundtrack. After almost dying out in the early years of the decade under the combined weight of crooners, girl groups, and Phil Spector's aural abominations, it came roaring back, and then some. Led by The Beach Boys in America and The Beatles in England, Rock and Roll became an unstoppable juggernaut, pushing aside everything that did not climb on board. 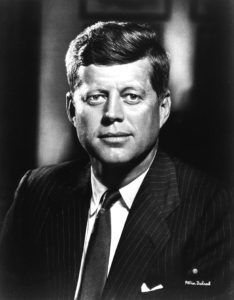 THE GOOD - Jack Kennedy stood up to the Deep State and prevented the outbreak of a thernonuclear war.

THE BAD - Tricky Dick may have been paranoid, but at least he didn't kill anyone

The decade of the 1960s contained three distinct eras, each one roughly coexistent with the president who was in the White House at the time. The first began in 1961, with the inauguration of John F. Kennedy as the 35th president of the United States. It was during this era that Rock and Roll fell upon hard times. Elvis' career had gone partially off the rails after he was inducted into the army in 1958; he still released records, even ones that numbered amongst his best, but he had lost most of his impact as a cultural phenomenon. The 1959 plane crash that took the lives of Buddy Holly, Ritchie Valens, and the Big Bopper also helped bring the 1950s to a screeching halt.

The musical landscape of the early Sixties consisted mostly of vocal artists that delivered a softer sound than what had prevailed during the mid to late 1950s. Gone was the excitement of the music produced by Elvis, Chuck Berry, and the others. It had been replaced by a collection of crooners like Ricky Nelson, Bobby Rydell, Brenda Lee, Sam Cooke, Doris Day, Bobby Darin, and many others. It seemed that Rock and Roll had just been a flash-in-the-pan, and that it was on its way out. Further proof of this was the continuing dominance of adult contemporary artists like Frank Sinatra, who was at the top of his game during the first half of the 1960s. This was also the era during which Phil Spector inflicted most of his girl group crap upon the record-buying public, a cultural crime against humanity that will be discussed in more detail in a different article.

Culturally speaking, the early 1960s could be described as a slicker and more sophisticated version of the previous decade. The glitz and glamour of Camelot may have replaced the steady hand of the Eisenhower Administration, but for most aspects of American culture, things had not really changed much. As it had done during the Fifties, America still respected traditional values, watched wholesome shows on television, and went to church on Sunday during the Kennedy years.

The world suffered a convulsive shock on November 22, 1963, with the assassination of President John F. Kennedy. This outrageous event brought the first of the three eras of the 1960s to a sudden and screeching halt. The massive cultural changes that were just over the horizon would have probably taken place, anyway, but the killing of Jack Kennedy certainly sped it up, or at least provided a clear demarcation of the end of the first part of the decade.

The second distinct part of the 1960s began with an equally impactful event, the arrival of The Beatles.  Ed Sullivan introduced the group to America on Sunday evening, February 9, 1964, when he featured them on his televised variety show. Beatlemania, which had raged in England and Europe for the past year, had arrived on our shores. They led the way in fomenting perhaps the biggest cultural change that ever shook the world. Their music was new and exciting; it pulled the nation out of the funk that the Kennedy assassination had plunged it into. As they had done with Elvis a few years earlier, young people took to The Beatles with enthusiasm.

The effect that The Beatles had on American (and world) culture eclipsed that of Elvis, both in magnitude and duration. For the next four years, they were on top of the world, the ultimate trendsetters and agents of change. It was not only their music, but the influence that they had on others that sparked the enormous social changes that the 1960s have become known for. Music, of course, led the way, as it changed radically. Gone were most of the crooners of the early 1960s, as the British Invasion swept them away. Existing artists either adapted to the new creative sound (The Beach Boys) or were cast aside (almost every other artist of the era).

The middle years of the 1960s, from 1964 through 1967, saw a renaissance of creative expression in all areas of culture. Rock and Roll underwent a resurgence, as the music became more complex and more creative. The two and a half minute single made way for the emergence of concept albums, complete musical statements that often revolved around a single theme.

This portion of the decade was also characterized by the emergence of mod fashions, more creative and interesting television shows (and in color, to boot), and motion pictures that increasingly began to challenge the Hollywood Production Code regulating content that had been enforced since 1934.

Unlike the 1950s, during which young people had respected the older generation, the police, and other bulwarks of American civilization, the 1960s saw them beginning to question authority. They no longer trusted anybody over thirty years old. Earlier generations of young men had meekly submitted to military conscription; during the 1960's, they began to burn their draft cards as they chanted "Hell, no, we won't go!" and "Hey, hey, LBJ, how many kids did you kill today?" Flower Power was in full bloom, as much of the Boom Generation tuned in, turned on, and dropped out.

The mid-1960s was an era of optimism, as the younger generation was confident that it could change the world, making it a more peaceful, as well as a more creative and exciting place. The hippie movement was characterized by love, peace, and good vibrations (and fueled, to a large extent, by the increasing use of marijuana and LSD, substances that had remained largely unknown prior to 1964).

In 1968, everything turned ugly. The racial unrest that had plagued the inner cities during the earlier years of the decade became more widespread, as antiwar protests began to crop up on college and university campuses, and in many of the major cities. Many antiwar demonstrators remained peaceful; however, many of the gatherings became violent, as agitators would whip a crowd up into a frenzy that would often result in protestors and police officers alike being injured. This culminated in 1970, the last year of the decade, with the National Guard's killing of four students at Kent State University in Ohio.

As the Summer of Love of 1967 gave way to the Winter of Discontent of 1968, the second part of the 1960s ended and the third part began. The Reverend Martin Luther King, Jr., the foremost Civil Rights leader of the twentieth century, was assassinated on April 4, 1968. This led to riots in cities across the country. Two months later, another group of assassins took out Senator Robert Kennedy as he was campaigning for president on June 6, just after he had won the California presidential primary. In late August of that same year, the Democratic National Convention in Chicago was plagued by violent protests over the war in Vietnam and the nomination of Establishment candidate Hubert H. Humphrey for president.

1968 was also the year that The Beatles began to fall apart as a group, as they began to argue over their music. This rancor would eventually lead to their breakup in 1970. Whereas they had been on the cutting edge of cultural change up through the previous year, by 1968 the culture had become so radicalized that they were viewed by many as has-beens. Music itself became louder and "harder," as acid rock, and even early incarnations of what would become hard rock, began to replace the more harmonious works of the middle period of the decade.

The 1960s that had begun with Jack Kennedy in 1961 had now come to an end. The war in Vietnam that had been the cause of so much strife would drag on a couple of more years before beginning to peter out, as President Nixon began to withdraw American troops. Nixon himself, who would be re-elected in one of the biggest landslides in presidential political history in 1972, would go on to crash and burn on the rocks of the Watergate scandal two years later.  On the other hand, the Sixties gave us the Apollo program, which led to one of mankind's greatest achievements - the 1969 lunar landing.

In comparison to the 1960s, subsequent decades would, for the most part, be more peaceful. However, the cultural changes wrought by that decade were here to stay. The social and cultural innocence or the 1950s and early '60s was gone forever, not soon to return.

The Rock and Roll that provided the soundtrack for the decade would continue to exert its influence for at least the next half century, and even beyond. Fifty years later, rock music may not be quite the juggernaut that it was previously, but its presence continues to be felt throughout the world.